As you’ve likely come to expect month to month now, here is the anticipated notes from the tasting event hosted by Ian of PDX Whisky fame.

This month was a bit unusual for us, as it was a bourbon, not scotch whisky, centric tasting. Additionally different was that Ted of Big Bottom Whiskey fame was also on hand to lead us through a tasting of his line of bourbons. As always, neither Ian nor Ted disappointed at the event. This go around we tasted five different expressions, with an added 6th ‘from the barrel’ brought by Ted. Following are my notes on each: 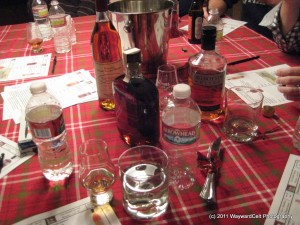 Clearly from above (and not so clearly from my lack of description of the rest of the group’s feelings) the big winner of the night was Big Bottom Whiskey. You may think I expected this to be the case, given how much I enjoy Ted’s product, but given it was tasted along side of two twelve year olds and an 18 year old bourbon, this was clearly an upset in the making! The group as a whole, and the majority of individuals all agreed that Big Bottom Whiskey was clearly the dram we’d all buy and stock on our shelves, while the other bourbons ran the gamut from “I might buy it” to “Nope never paying money for that one”.

As always, a fun and enlightening night was had. Anyone within the Portland area should really “Like” the PDX Whisky Facebook page and join us in January when the next event is scheduled and posted! Y’all are missing a great time!