A few weeks ago I went to a whiskey tasting to promote Single Cask Nation, a club that makes bottles available from a distiller’s single cask negotiated by Mr. Hatton.  It is a brilliant concept for the whisky connoisseur collector; and if someone wants to really impress me for any gift-giving occasion, I’d love a membership; but right now it is out of my price range.  The clubs offerings are all cask strength, and all have a researched history, which I’ll link to with each post.

The tasting itself was nicely run, and the host venue, Blu Jam Cafe in Sherman Oaks, provided several light diner options and cold water. We sat out on the back patio, which presented a few challenges for a tasting that I will get into later. It also is the reason I don’t have pictures: I relied on my cell phone, that does not have a flash, and as the light quickly faded I realized I was not going to be able to capture any quality images.

Since he has a relationship with the distillers and is such a lover of whisky, Joshua had a great story to go with each offering. He quickly built a rapport with the attendees and the evening passed all too soon. If you have an opportunity to attend one of these tastings, I highly recommend it.

If you, however, you might want to bring your own glasses.  Only one was provided for each of us – so not only was some whisky wasted as those who didn’t want to finish their (measured) pours were forced to pour it in a waste container, but we were on our own for cleaning the glass between drams.  I was the only one being so diligent as to rinse, wipe, then rinse again to remove any lint, and leave the glass up-side-down to let the water drain out.

Also, on the “needs improvement” list, there were no palette cleansers and since time was a factor, we moved rather quickly through the drams, not leaving much time for blooming or color appreciation between pours.

There was much chatting, and I went back to the Kilchoman after the air cleared, but after 6 drams, I wasn’t able to pull more out of it.  Then I had another dram of the Dalmore to end the evening with my favorite.  I have to say the 2nd  taste wasn’t as remarkable, but I think I can blame a dying palette and lingering skunk more than the whisky itself. 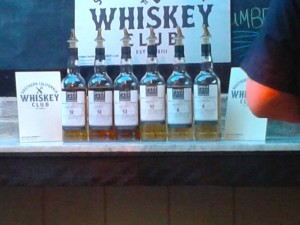 Should I come up with a budget for a subscription, and a bottle or two throughout the year, I think I will be joining the Single Cask Nation.