Late last month Ginger and I took a trip to Las Vegas. I’m kind of getting over the whole gambling as entertainment thing these days, but I thought I may take advantage of the town, and the wife being occupied at the games, to explore some dram spots I have heard of in the interim as well as confirm a few that were old favorites back when the dinos walked the earth. Understand that I’ve not been to LV is quite some time, likely 7 years which is like 150 years architecturally in any other town in the world. 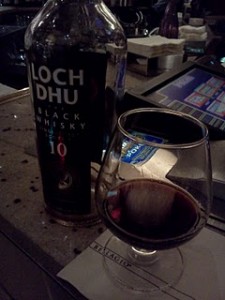 Stop 1: An old favorite, the Bellagio. This hotel casino has always been one of the better places on the trip to get a selection of whiskies and the journey to it while I enjoy playing online games like live blackjack online or others which you can check this out, without a doubt in my mind make it one among the essential moments of my trip. Not a remarkable selection, but they have more that any of the other major casinos put on the shelf and for that I recommend them more than anyone out of my comparison list of new sites and casinos I like. Any old whisky was not what I’d come for thought, I came for a dram of Loch Dhu (the black whisky). They’ve changed the layout of the casinos over the years and it took a while to find the little bar between the hotel lobby and the theater I have been sending people to for years to get a dram of this quiet still expression. You see back when it first was released to the US Market, Loch Dhu was very inexpensive, something like $25 if memory serves, and the bar manager liked it and bought a pallet of the stuff. Not too many years later, the distillery was bought by the French in order to get another expression and the black whisky fell out of production entirely. You could not buy a bottle today for less than $250, a nice turn if you were an investment collector. I’m not and I’m partial to this dram so I sit down and order one. The tender pulls the bottle and pours the last bit, just about a full shot, into a snifter and tosses the bottle. I then do what I’ve done every time I’ve gone and done this at the Bellagio, I ask if they will sell me a bottle. He says that they can’t do that because that was the last of it and they aren’t expected to get any more. This being the case, and me getting the last dram of the last bottle from that pallet of Loch Dhu, I tell him the story about how many 3DC over the years I’ve sent in to have a dram of this stuff and ask if I could have the bottle he tossed. Needless to say, it’s sitting in a place of honor on my shelf. 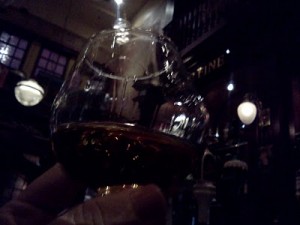 Stop 2: Nine Fine Irishmen at New York, New York Hotel Casino. This is a finely appointed Irish pub with the obligitory imported pub fixtures and furnishings. I was there for lunch and they were piping in a very good selection of Irish Drinking tunes. Everything from the Clancy Brothers to the Pogues so that bit was very good. The selection of whiskies was better than average and fairly competent in the Irish category. The bar had that tight confined space that usually makes a pub feel right and that you don’t generally get on the strip in Vegas, but alas, something seemed off a bit. I sat at the bar, ordered a Bushmill’s 16 and a corned beef sammy on rye. The food was tasty the dram fine but something was off in this place and I’m pretty sure I know what it was. The bar staff. Sure they were nice enough, but they didn’t seem to know how to run an Irish Pub. After gabbing with them a bit and unavoidably listening to two of them lightly bitch about their schedules, I discovered that the NY rotates the bar staff around the casino daily so they don’t really get to know each bar’s eccentricities and high points. Hell at one point they asked if I needed anything else and I said I’d have some vinegar for my fries if they had any and he responded “what kind?”. In a moment of shock and ill-composure I responded, “I’m sorry I thought for a moment I was in a pub.” He smiled and said “Malt vinegar, right.” That pretty sums up the Nine Fine Irishmen. It’s been managed into a bad place. A dedicated staff and a manager who knows what an Irish pub should be like could fix this place in a heart beat. As it is, I won’t be back unless I hear something to suggest they fix the management issues.

Stop: 3 Ri’Ra’ at Mandalay Bay Hotel Casino. Now this is a fine Irish Pub. A little plastic Paddy, but in a good way. The North wall of the main pub was a series of glass cases filled with a veritable cornucopia of whiskies. Scotch, Irish, American and more. There had to be over 150 expressions (I didn’t bother to count) and the feel of the place was outstanding. The food was great and the Knappogue 1993 was a perfect paring for my lunch. This place had a more open feel despite the main bar being a long strip that lead back into a larger hall, the ceilings were high and the decorations did not mantle over you like a vulture. There is a side room behind the bar that has a very club like feel to it and would seat around 40 comfortably. The reason I mention this is that the idea has bee floated that in coincidence with the upcoming Practicum of the Sword next year. To that end I spoke with the assistant manager, who said I should speak with Mark McElkerny (who was on vacation) on the topic but that it may be something they would be interested in hosting for us. It would likely be more costly to go this route, however it may be worth it as they could provide the food and the whiskies to our direction, leaving us with just showing up and enjoying our own event. I’d likely still want to blather on about something or another regarding the drams etc, but I’m good with that. There is fairly easy access to this location from 6 of the strip hotels via a tram as well giving people a wide choice of hotels to stay in. Something to think about. More on that later I guess.

Stop: 4 (and final) Freakin’ Frog’s Whisky Attic and Prof. Adam Carmer. Next time. This one warrants its own entry.

Read on for Part Two here…

One Response to Raz’ Las Vegas vacation with a slant towards whiskies: Part 1