I had some time to kill the first full day after Passover (A Jewish holiday where one abstains from bread and grains for 8 days) and decided to sup at a pizza joint.  I was seated near the bar and could hear the training of the new tender.  My eyes started to wander across the whiskey selections and I came across the following bottle: 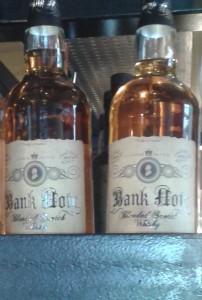 Something about the label had me transfixed, and I walked up to take a closer look.  You see, though the bottle was with other whiskies, I couldn’t tell if what kind of liquor this was.  Once I got the bartender’s attention and asked, he told me it was their standard “well” whiskey and that since it was Happy Hour, the dram was far more than reasonably priced.  How could I refuse?  He was also kind enough to let me snap a picture of the full label after he poured a generous dram, neat. 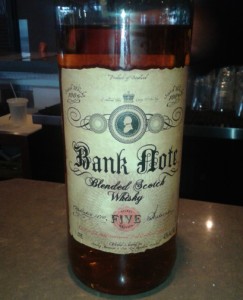 Once I had the dram in my hand, it was love at first sight. No, really, the color of this blend was so warm and inviting I was both eager and hesitant to drink it. I’d call it amber, but it doesn’t do it justice. 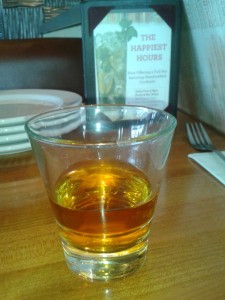 Like a mix of honey and candlelight, but with a level of clarity I don’t think I’ve seen before.  (I really hope that is the natural color and not because of an additive, but I’m not sure how to find out.)

The bar did not have a tulip glass, so it was served in an angled old fashioned. Not a bad glass, but without a lower bulb, it was hard to swirl the dram and not spill a drop.  I settled for a slow rotation and was almost hypnotized as the sheet broke into legs led by heavy drops, indicating a greater-than-average viscosity.

Falling in love with the aesthetics, I was ready to start the olfactory experience. Bringing my nose over the glass wood smoke is the first impression, but it is light and tempered with soft brine; like a campfire put out with ocean water. The overall bouquet is mild, and though lingering, even with my nose in the glass, scent seems a little muted, as if I’m trying to find something just out of reach by scent.

I almost don’t want to write the next paragraph, about the actual taste.  I so wanted the flavor to match the visuals and nose; but I found it falling short.

— Here is where I must give a small warning to the reader – at this tasting I had a bit of a burn in my mouth from my morning coffee. I’m afraid this colored my actual tasting of this dram. (Meaning I’ll have to have it again when my lips and mouth are at their best, no?)  —

There was just a little more burn than I wanted, and the flavors, though not bad, just didn’t live up to the complexity of the nose. There was still a distinct smokiness, and a salty feel around the mouth, and even notes of citrus threatening to break through, but nothing really stood out or lingered for very long.  Overall I was left with not much more than wood and burn on my palette.

I tried to warm the dram, but the glass made that impossible, so I bloomed it with a few drops of water, hoping to quiet the heavier wood notes and bring up the hints of citrus and smoke – but it had the opposite effect.  The nose went almost dead, and the flavors just all muddled together into a generic whiskey taste.  I can’t imagine using this in a cocktail if it loses so much character just with a little water.

Overall, I don’t think I’ll be buying the bottle. I wish I knew more about the process, and the distiller to hint at how there can be such disparity between sight, smell and taste – and  I’m hoping this impression is due to poor tools. Stay tuned for the epilogue after I taste this again, (at Happy Hour, or course.)

2 Responses to Better get Cash