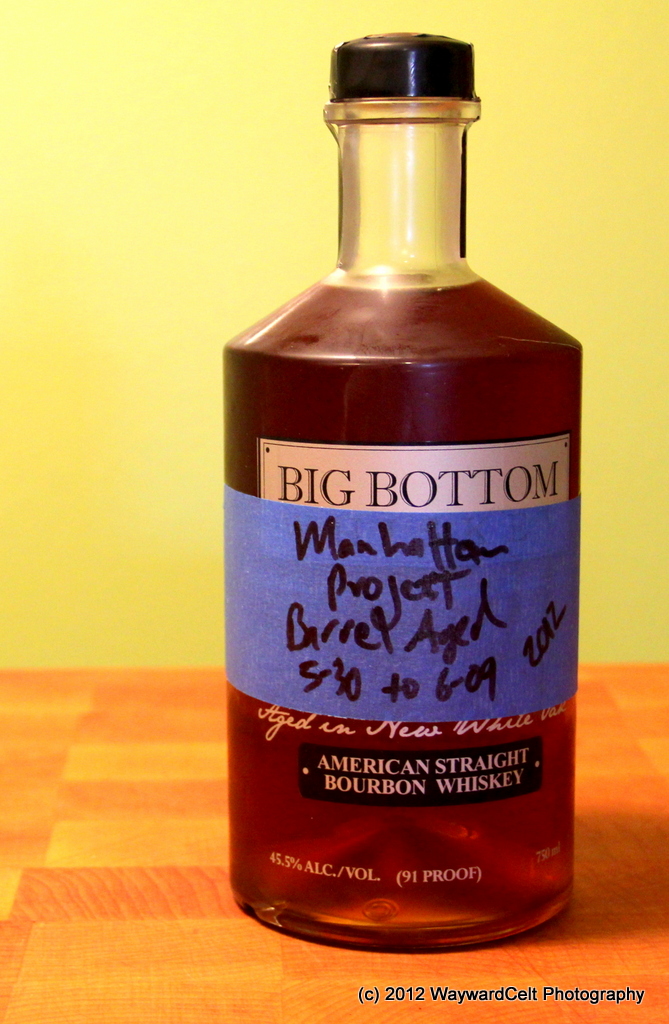 Generally, the 3DC don’t speak much about cocktails and rather prefer to imbibe in the dram straight, neat of course. But there are indeed cocktails we enjoy, one of them being the traditional Manhattan.

So what to do once your 2 liter barrel has aged two runs of whitedog whiskies and is essentially spent when it comes to aging bourbon? Well, you take a page out of Jeffery Morgenthaler’s blog (soon to be book), and barrel age your Manhattan, obviously.

Here’s the recipe I used (thanks to Big Bottom Whiskey’s website ) to mix up my first batch of what I un-creatively dubbed “The Manhattan Project”:

I scaled the recipe up to fit my 2 liter barrel using the following amounts:

Once the 2 liter barrel was filled, this recipe yields an extra 750ml bottle of finished cocktail plus enough for one drink while I’m cleaning up… You may wish to scale down the recipe slightly if you don’t wish to have that much extra. In my case I wanted to see how the same cocktail faired in glass versus barrel storage, so having a bottle extra worked perfectly for me.

I filled my barrel and promptly forgot about it for a week. To my utter shock and surprise, when I remembered to test a sample a week and a day later, the change was remarkable. So much so I opted to halt the experiment then and there, bottle up the first run, and mix up a second batch.

Because of the large difference I tasted after only that first week, I was hesitant to keep it in the barrel any longer for fear of getting too much oak and tannins from the wood in the final cocktail. As it stands after only a week, the cocktail has pulled a nice mild smokiness and woodiness from the barrel while at the same time marrying the vermouth, bitters, and bourbon into a single entity rather than three distinct parts. A comparison of the glass bottle cocktail aged for the same length of time shows the marrying beginning to occur, but only in its infancy stages after a week. Obviously the glass version doesn’t have that deeper richness imparted by the 2 liter oak barrel either. The difference a single week in the barrel made was a spectacular showing of just how distinctly different barrel aged cocktails can be from their normal counterparts.

I enjoyed the outcome of this experiment so much so that batch 2 is now resting in the barrel, perhaps for even a bit longer this go around. After that I may experiment with only barrel aging the vermouth rather than the entire cocktail (a suggestion from Ted Pappas of Big Bottom Whiskey) based on the fact that the bourbon is already oak aged but the vermouth is not. The only component missing being the time to marry the ingredients, which could then be done in a neutral vessel like glass.

Of course, next up I can really start playing with the variables and find the perfect vermouth and bitters, or even go down the path of making my own bitters… but I think I’ll save that rabbit hole for some other time and simply enjoy my pre-made cocktail for a bit instead 😉