This was a tasting I was personally looking forward to with great anticipation as we were to be sampling the Aberlour 12 Double Cask, Aberlour 12 Non-Chill Filtered, Caol Ila Distiller’s Edition, and Compass Box The Last Vatted Malt. Since we can’t get this last bottle retail in theU.S., I was really looking forward to being able to sample it. I even made some idle threats in Ian’s direction that I may kick him in the shins and abscond with the bottle…  I don’t think he was swayed by my warnings though…

Luckily, I didn’t have to resort to violence, as we soon got to the tasting and began passing the bottles around… here’s the notes I took on each:

And since we were talking about how The Last Vatted Malt wasn’t available in theU.S., Ian decided to pull out another Compass Box offering only available inCanada. Ian had actually pulled out this particular bottling once before so the notes below will be a combination of both times I’ve tasted this:

And then came the final bottle I enjoyed that night. Sadly I stopped taking tasting notes just prior, though to my benefit I was able to enjoy the little bit that was left in the final two drams of the bottle… I will say, the Tobermory 1798, 15yr is a spectacularly wonderful dram to finish out an even of amazing drams.

Sometimes, it is indeed good to be me 🙂

First off dear readers, great apologies for the delay in this recap of the recent PDX Whisky tasting event held at Ian’s house on August 12th, 2011. Because of the delay in writing this post, it will be less detailed than prior posts, as my recollection is a bit muddied now. I promise in the future to be more vigilant in my note taking, and subsequent write ups.

I do have an extra special gift for you all, however… multi-media! Yes, a picture… in a post even! Will the wonders never cease?

Ah, dear friends, if you know me (Seamus/Jason) or the 3DC at all, you know our fondness for John Glaser and Compass Box whiskies. So this past PDX Whisky tasting was a real treat for me. No, not because Ian had some Great King St. to share, but because he had a bottle of Magic Cask; a bottle I should note is unavailable in the US, as it was only released to our Canadian neighbors. Any chance I have to taste something I can’t get is a privilege, especially so when it is from one of my favourite producers of the lovely water of life.

A quote from “The Scotch Blog” regarding this bottling:

“The Magic Cask was a special release for the Liquor Control Board of Ontario (LCBO) and is only available in Ontario. Because John Glaser created this product as an experiment, he wasn’t quite sure what to do with it until the LCBO opportunity presented itself. Because Canadian whisky makers are allowed to use up to 9.09% flavouring (i.e. other whiskies like bourbon, wine, fruit juice, etc.), many don’t, but they can if they so choose, John thought this would be a good product for this limited Canadian release. “

Read on at the link for their tasting notes which you’ll see are a bit different from my own.

In typical PDX Whisky style, we had four bottles to taste (though we had additional once the main 4 were sufficiently discussed). Notes on the four, in the order we tasted are below:

Now, it should be noted that once we’d completed the ‘official’ tasting, is when things got a bit rowdy… my memory is a bit poor of the whole evening, but at one point, a bottle of “30 year old Chinese distillate” made its way out of the box and around the table. I will refer you to my wife’s tasting notes as she posted on Facebook: “Tasting notes – anise, bubblegum, Limburger cheese, stinky feet of an 11 year old girl. That shit was FOUL! http://t.co/KVqhUmi” followed by a clarification: “Chinese moonshine. 30 years old, apparently? J called it “challenging”. I worry about that boy.” And indeed it WAS challenging. Most/everyone at the table hated it; there was a permeating stink to it which makes me happy I didn’t spill any on me, but I wouldn’t classify it as bad per se, simply challenging. That said, I refused the bottle when I was told I was taking it home… so, you know, it was -very- challenging.

Our Tenth Anniversary Flaming Heart bottles from Compass box came in last week, were then hand labeled by Randy and Adrian… and they look Stellar! No, really, check em out:

Labelled and ready for distribution. 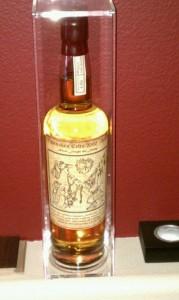 One bottle, sitting proudly at a member's home.

If you ordered one, contact Adrian Trespando for payment details, then either Adrian or Randy Ullon for delivery logistics (Adrian for NorCal/Az., Randy for SoCal). Adrian has noted he is going through the list and will hit the yahoo group. He will let you know how to pick up bottles and who still needs to pay.

The godfather and his helpers have arranged a deal with Compass Box Whiskies to provide a few cases of unlabeled 10th anniversary Flaming Heart for the 3DC to use for our own 10th anniversary this year.

While all bottles are now spoken for (9 cases worth at last count), I thought this a good opportunity to highlight this momentous occasion as we can firmly say we are committed to the whole deal. And I can also say this is likely the single most exciting thing the 3DC have pulled off to date. Check out the preview with the original Compass Box labeling: 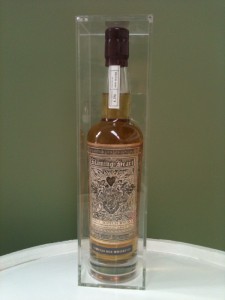 The only downside here is that we have to wait until November to take delivery of the bottles. But my, oh my, what a great way to celebrate the 3 Drunken Celts’ 10th anniversary but with a bottle especially made by Compass Box for their own 10th anniversary in the same year and month!

Of course, our bottles will come without the front label, where we will be applying our own custom 3DC labels to commemorate the combined anniversaries. We’ll be sure to post pictures of those in November once we have them in our hands. Until then, let this server to whet your appetite for a new and amazing bottle of some truly special whisky!

As you may know, the 3 Drunken Celts have a close affinity for John Glaser and his company, Compass Box. We met nearly 4 years ago now, and have been supporters of his efforts… and by supporters, I mean we not only drink his blends, but preach the quality of Compass Box to any and all who will listen! So, when given the opportunity, you KNOW we will do what we can to spread the word… so go check out their Facebook Fan Page now!

Sadly, it seems John won’t be at Whiskies of the World this year. Luckily, in his stead the brand ambassador, Robin Robinson, will be representing the team. I, for one, am looking forward to meeting Robin (as we have spoken via Facebook messages once or twice) and toasting a tipple to all who couldn’t make the event.

If you will be attending any of the events where Compass Box is making appearances, be sure to stop by and introduce yourselves to Robin (or John Glaser, or Chris Maybin, or any others representing the brand); let them know how you heard of them and that the 3 Drunken Celts say hello… after all, there ARE more than just 3 of us!